Paragon 360 was brought in after the project had already been started and after the facility was mid-way constructed in October of 2010. Paragon was charged with picking the project up mid-stream and following through on the design, installation and provision of audio, video and lighting systems in addition to stage sets and a modular choir riser system. The project was completed on time and met the churches $1.4 Million Dollar budget.

“We came in real late on this deal” states Donnie Brawner, Paragon 360 CEO. “We started by spending a weekend with the church, studied their services and spent a lot of time discussing the plans and their situation, desires, dreams and so on in October of 2010. The design process however really did not start until February of 2011 with the church opening its doors in early August. This was a real fast track from early conversations to completion for this large of a system. I think it’s the Paragon model that made it possible.”

The main sound system is comprised of the Avid Digidesign D-Show mixing system. Utilizing two forty-eight input stage racks as well as local input capability, the facility has a total of (128) inputs available both at FOH and in the recording suite. For recording capabilities, a Pro Tools HD128 system is installed, controlled by a C|24 recording console. Main speaker system includes JBL PD-series loudspeakers, along with custom designed in-step front fill loudspeakers. Stage monitoring includes an assortment of JBL floor wedges, flown monitors for choir as well as a two-universe Aviom system, hardwired for the band/orchestra and utilizing Sennheiser IEM for the praise team. Sennheiser 2000 series wireless microphones are used as well as a large assortment of Shure hardwired microphones. Processing is BSS London, controlling EV amplifiers. Multiple rack locations throughout the facility control not only the main sanctuary system but also an elaborate paging and BGM system throughout the hallways, entry ways and other auxiliary areas. Reviews from the church staff have been extremely positive. The system allows great flexibility and control along with outstanding sound quality.

The video system was designed around present and future growth. Three large projection screens grace the stage with vibrant colors fed by Christie Digital projectors. Projection signals are maintained and switched via an AlalogWay SMX-200 matrix switcher with remote control panel located at FOH. The center electric screen control and all projector power is controlled by an Extron control panel and control network. All installed aspects of the video system backbone and operation can accept both HD and SD SDI video signals. Triax camera cabling was installed throughout the facility to be used by the owner furnished cameras as well as any rented or traveling cameras. This insures superb present day operation and promotes growth into the future.

At the heart of the video system is a multi-rate 32×32 Extron digital video router that distributes all video signals seamlessly throughout the entire facility. All video signals are synced with an Evertz Satellite synced Master clock as well as all recording/monitoring devices showing accurate timecode throughout the facility. Receiving and mixing these video signals is a Ross Crossover (16) digital video switcher. An Allen & Heath Mix Wizard mixes all the audio playback signals and sends them to the audio system. Forecast Consoles provided the technical furniture that was custom designed by Paragon 360 for the production room. Aside from the amazing video experience in the main worship center, a modulated audio/video signal is distributed throughout the facility via a ZeeVee Pro280 video modulator system.

"From the first interview to the final product, I was aware of Paragon 360’s understanding of the church, and knowledge of their craft. They helped us design sound, lighting, video and staging that would uniquely serve our church and ministry."

The lighting system is designed to accommodate large rental systems or touring acts as required in the future. The current house systems include over (100) conventional ETC fixtures and (20) Chauvet moving wash units. There is another (50) Chauvet LED units lighting the stage set and (50) Pixi LED strip units lighting the proscenium arch that extends around the edge of the stage area. All of the lighting is controlled by an ETC eight universe EOS console with button stations throughout the venue. Over (85) ETC Source Four house-lights were used for house-lighting.

The stage set carried the signature Paragon 360 trademark. The stage set included three unique 33’ illuminated walls and screen towers that filled the upstage area with illuminated graphics.The graphics throughout the set can be changed out anytime and take on different looks constantly with the LED interior lighting. The center screen tower houses a motorized video screen allowing a see through to the baptistery. The modular choir risers are built from Paragon’s signature Modular Cube System which allows complete versatility and flexibility in the layout of choir and orchestra. The stage design also includes one of Paragon’s custom designed pulpits. 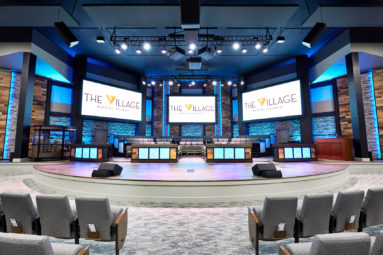 Get started with us on your project today.